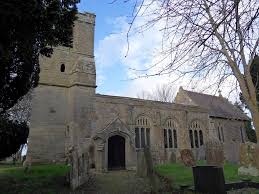 The church of St. Thomas is a small building of stone erected about the end of the 13th or beginning of the 14th century, and is chiefly in the Early English and Decorated styles, with some portions of Perpendicular date, and consists of chancel, nave, south porch and a low embattled western tower containing 3 bells, two dated 1350 and one dated 1770: the organ was presented by J. P. Cross esq. of Catthorpe Towers in 1886; in 1897 a memorial window was placed in the south side to the Cross family and another in 1908 to J. P. Cross esq.: a brass tablet was erected in 1921 in memory of the five men of this parish who fell during the Great War, 1914-18: the communion plate includes a paten dated 1569 and a chalice dated 1568: the church was restored and reseated in 1885/1886 with the addition of new vestry and organ chamber, rebuilding of porch, rebuilding of chancel arch and part of chancel south wall, at a cost of over £1,200, and affords 125 sittings.

Thanks to the fund raising efforts of the villagers, the bell tower was repaired in 2018, and volunteers from the Upper Avon Valley Bells, volunteer maintenance support team carried out maintenance to bring the bells back into ringing order.

The Church of St Thomas

The West Tower Window in need of repair